Couldn’t budget your time to deliver a PowerPoint presentation in person? Or you suffer terribly from stage fright when speaking in public? Whatever troubles you have, the mighty PowerPoint has its plan for you.

Yes, let’s do a voiceover on PowerPoint, then all problems solved. In this post, our visual expert shows you how to record a voiceover to PowerPoint in multiple ways using its full-featured audio-recording features and a versatile online screen recorder. So, let’s dive in.

Inserting your audio narration directly to each slide is the most basic way to add a voiceover to a PowerPoint. And the PowerPoint offers us two ways to do so.

Option 1: Insert an Audio from Your PC

Directly import audio from your pc to PowerPoint

Then you can import a pre-recorded audio file to a particular slide of your PowerPoint. Once you insert it into a slide, an audio icon will appear. Move your cursor to this audio icon, you can play the audio. Check how to record any Chrome tab with audio.

Bonus Tips
As you play the audio, the “Playback” tab shows up at the top of the toolbar. Tap it, you can decide whether the audio will start automatically as you advance the slide or in click sequence or when clicked on. Meanwhile, you can use the trimmer to trim the audio, add fade-in/out effect and adjust the volume or choose how the audio plays across the presentation.

Use the “Playback” tab to customize the voiceover on PowerPoint

Then a pop-up window will appear giving you the option to name this voiceover before recording. Do make sure you have your mic connected to your PC. Next, hit the red recording button and start talking, and your voice will automatically be recorded. Check top 5 online screen recorders with audio.

Press the record button to start recording a voiceover on PowerPoint

To stop the audio recording, press the stop button in the middle, and hit OK. Your voiceover will show up in the form of an audio icon.

Bonus Tips
Likewise, you can hit the audio icon and head over to the “Playback” tab at the top of the toolbar to customize the audio play mentioned above or tap the “Audio Format” button where you can change the color and style of the audio icon to spice up your PowerPoint. 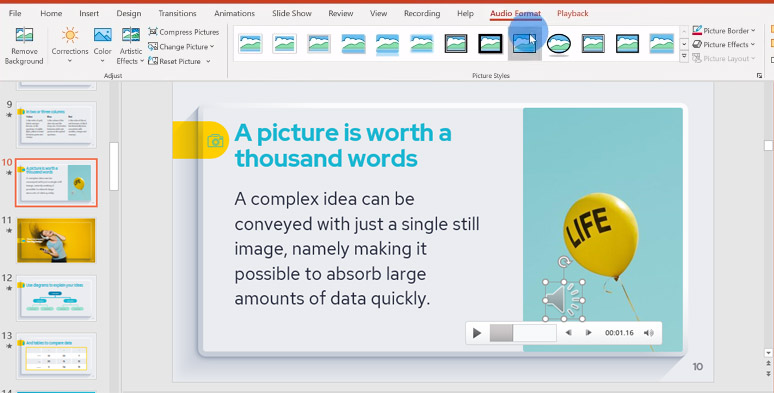 Customize the audio format on PowerPoint

A flattering way to add a voiceover to PowerPoint is by using the “Record Slide Show” option. By doing so, you can screen record every page of your slide while recording a voiceover to each slide accordingly.

Then a pop-up window will appear. Make sure you check both two boxes because this tells the PowerPoint recorder to record all slides, animation timings, and your audio narration, etc. Then press “Start Recording”.

Start recording the voiceover and visual of a PowerPoint

Now, you can start talking and your voice will be recorded. Once you’ve done a voice-over for a specific slide, left-click to advance a slide. As a new slide appears, you can start speaking again, the recorder will again capture your voice and the visual of the new slide.

Bonus Tips
To have a smooth flow of your audio narration, before you advance to the next slide, do stop speaking till the new slide appears. Otherwise, part of your voiceover will get cut off.
Step 3
Stop Recording and Replay the Voiceover

After you’ve recorded all the voiceovers, to end the recording, press the “Escape” button on your keyboard. Now, you can see that each slide is added with an audio icon. Click an audio icon to play the audio.

If you are not satisfied with a specific audio recording, click on this slide and press “Record Slide Show” > click on “Start Recording from Current Slide”. Then you can re-record a voice-over to this slide and the previous audio file will be written over. 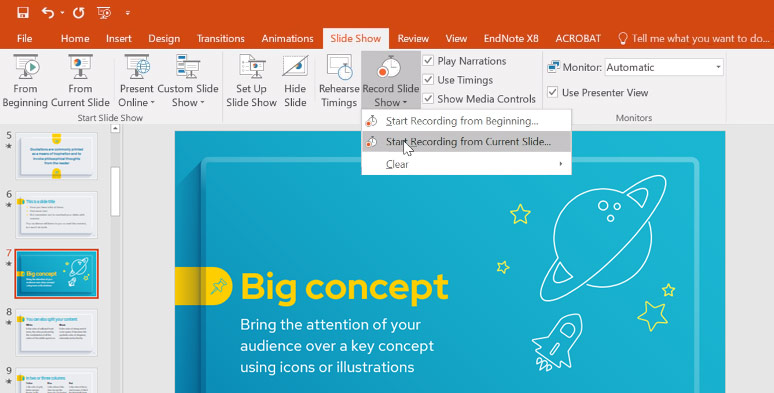 Start recording from the current slide

Bonus Tips
In this case, don’t click on “Start Recording from Beginning” or all the previous audio recordings will be gone and you have to record all the audio from scratch.

How You Export PowerPoint Also Matter

Now, you’ve added a voiceover to a PowerPoint. 90% of the people will save it as a simple PPT file. Yet, Microsoft PowerPoint offers us another option to export the slide show as an MP4 video (1080P), which makes it easy for circulating this virtual presentation online. 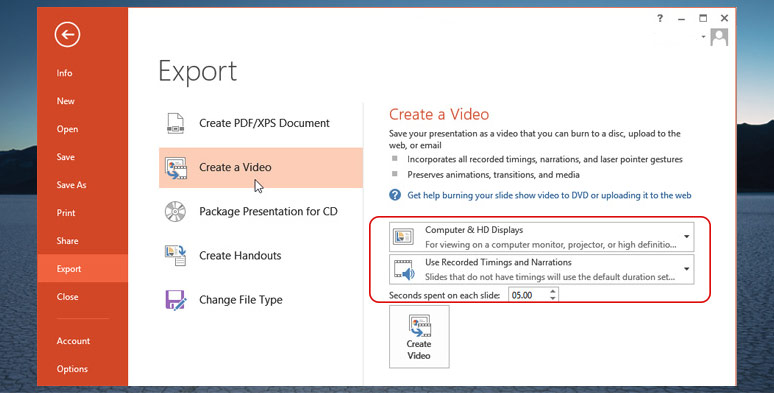 How to Do a Voiceover to PowerPoint Using RecordCast

Though Microsoft PowerPoint offers us different options to do a voiceover to our PPT, for non-conformists like you, having more control of the whole recording and editing process sounds more appealing.

In this case, using RecordCast, a free and versatile online screen recorder, and video editor, to record a voiceover to PowerPoint, could be a game-changer.

Use RecordCast to record both voiceover and video of a PowerPoint

If you only want to record the PowerPoint slide with voiceover, Choose “Screen Only + Microphone “ will suffice. If you want to create a picture in picture effect like what you see in a video tutorial on YouTube, then the combo of “ Screen +Webcam + Microphone + System Audio” will do the job.

Set up the video and audio recording setting for a PowerPoint

After you set up the basic settings for the video and audio recording, then click on “Start Recording”. A pop-up window will appear. Next, click on “Application Window” > select PowerPoint App> Check “Share Audio” and “Share” button > press “ Start Recording”. 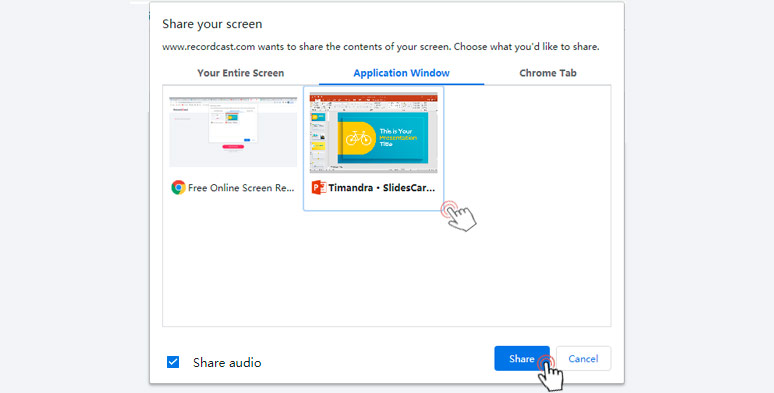 Then you can play the slide and start talking. RecordCast can record the video and your voiceover simultaneously.

Step 4
Stop the Recording and Edit It

Once you finish the recording, press the “Stop Sharing” button. Then, go back to RecordCast, now you can playback the recording. Hit the “Download and Edit” button. Your PowerPoint recording with voiceover will be download in WebM format to your local computer. 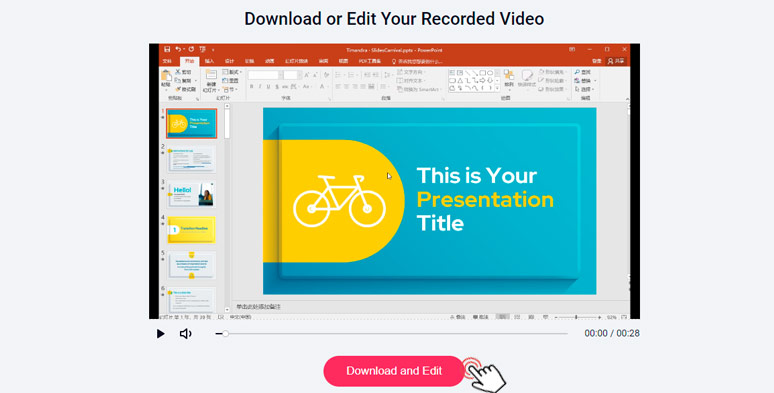 Meanwhile, you will be automatically directed to the built-in video editor of RecordCast, where you can place the recording on the timeline and trim your recording, add expertly designed text effects, dynamic emojis, and dazzling overlays or import images, audio or videos to enhance the whole PowerPoint recording.

Finally, after everything is done, hit the “Export” button to download an exquisitely-made PowerPoint video with voiceover in MP4 (1080P) to the local document folder.

To sum up, you use the “Insert Audio” feature and “Record Slide Show” feature of PowerPoint to easily do a voiceover to your PowerPoint presentation accordingly. If you prefer more control of your recording, using RecordCast to add a voiceover to PowerPoint gives you more flexibility.

So, hopefully, you find our suggestions and advice helpful and if you come up with a better way to record a PowerPoint presentation with audio, don’t hesitate to tell us.